V-Rising Early Access Review – Become The Lord of The Night 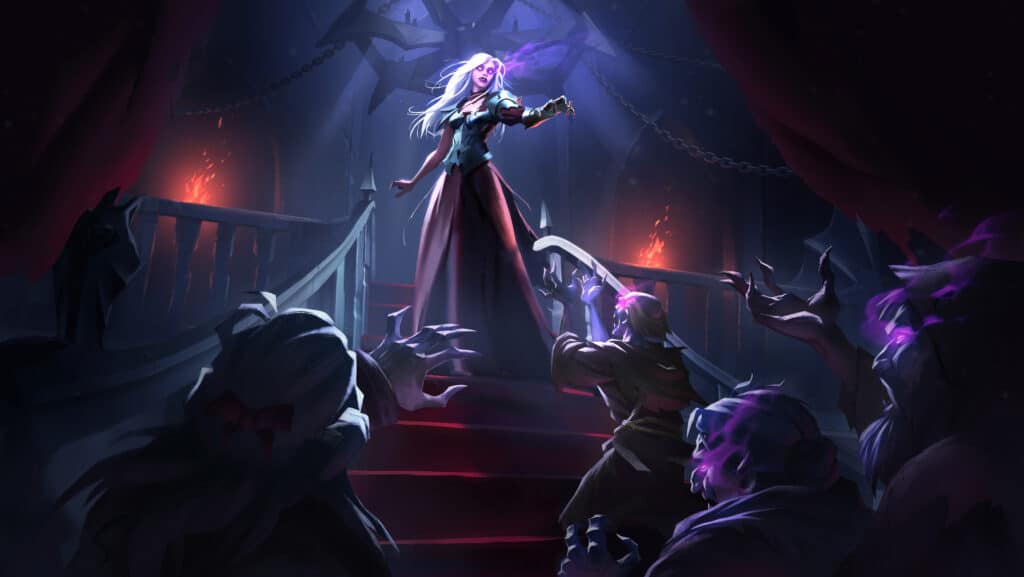 Over the years, I always had an itch for a good vampire game. The closest I’ve got to play one is Vampire The Masquerade: Bloodlines. But it ended right then and there. Years later, my search for Vampire games landed me on V-Rising.

The game, developed by Stunlock Studios, is an isometric survival RPG with base-building and co-op PvP. While most of the game’s been a pleasant experience over the last couple of weeks, one specific gameplay element is quite frustrating, along with some questionable design choices.

Riding Through The Night in V-Rising

V-Rising doesn’t have an overarching storyline to fall back into, nor does it have any in-depth lore backing it up. The game relies on the players creating the experience by themselves and telling their tales of becoming the ultimate lord of night. The only piece of the storyline is the intro cutscene, which sets the backdrop for the title. The game picks up immediately after the opening cutscene, as players control their newly awakened Vampire. Thirsty for blood, players start their journey of becoming the next Dracula in the human-ruled world.

Before starting the game, players create their characters using a simple yet satisfactorily detailed character creator. The character creator has the essentials needed. One can make a pretty menacing-looking vampire or a complete clown. While I’ve seen better character creators in other games, the inclusion of it is welcoming. Apart from that, voice-acting-wise, the NPCs and boss characters have voiced lines, which are not plentiful but give them some personality. The player characters have the default male or female grunt and screams.

Rule The Night, Sleep Through Daytime

V-Rising doesn’t feature any single-player storyline and has to be played by either joining hundreds of player-hosted servers, which can be PvP or PvE oriented, or players local hosting their servers.

The gameplay gets divided into parts, with the first hour and two of the game dedicated to the tutorial. The game has a brilliant tutorial for an online survival game. The tutorial shows players enough to understand the core mechanics, leaving them to grow and get better by themselves once done.

One of the focuses of V-Rising from the get-go is building your castle. Players claim a plot of land on the map and start collecting resources, such as wood, rock, and more. This is the survival aspect of the game, as building a base along with a coffin is essential. The castle acts as players’ base, where they can store items and resources. Once I started building the castle, I realized that more production structures demand unlocking. To do so, specific targets need to get assassinated as they drop the knowledge of the facility. This is where a part of the PvE combat gets introduced. Apart from the hundreds of minions on the map, which can be killed and taken out for blood, the game features some of the most fun boss battles. Killing the bosses will give players new powers and the necessary production structure required to progress. After starting to grow in power, I had my first experience against a higher-level player. So he did it in the usual online survival game method: raiding my castle and introducing me to the PvP section.

All this has to be done at nighttime because sunlight will deal damage. After all, we are vampires, and vampires are mortal to sunlight.

Some Frustrating Things in The Game Make it Annoying To Enjoy

Of course, the game is not without its flaws. The game features a fast-travel system, which is frankly useless. Fast Travel is only allowed if players don’t have resources in their inventory.

Secondly, some building restrictions are baffling at times. For example, when making the flooring, one needs to remove it from the path. It is frankly annoying, and there are numerous examples of this. Not a deal-breaker, but annoying at times.

The biggest annoyance of mine with this game has to be the resource grind aspect. Now I know this is a survival game, and grind is an aspect of it. But V-Rising’s grind is just not fun at most times. It’s tiring and is frankly frustrating. In one instance, we needed planks by processing a certain amount of wood. This processing of wood takes somewhere around a minute for one plank. Similarly, iron and copper smelting takes a minute, and so on.

Once you consider the item requirement, that is when the resource grind becomes obvious. Of course, players have the option to fix it by hosting their own game and tweaking the material gather and output costs, but the vanilla grind is tedious and my biggest gripe with the game.

Listen, I love survival games, and V-Rising is no different. The game has its moments, and playing it with friends makes it fun to play. However, there are some flaws, which are subjective but are worth pointing out. While the game offers tons of content for the pricing it is selling for, and the PvP and PvE aspects of the game are nail-biting yet fun, certain fundamental features of the game are tedious and frustrating, which, if not addressed, will push the players away. Of course, granted that the game is in early access currently, things will change. Fortunately, Stunlock Studios is listening, and they take feedback proactively.

It will be interesting to see what the future for the game holds. For now, if I keep the grindy aspects of the game aside, this is a good survival PvP game worth everyone’s time. If the grind is something not to one’s taste, maybe hold off for a bit.

Stunlock Studios' V-Rising is a good survival game with some interesting game design put into it. Filled to the brim with content, and offering a great PvP and PvE experience, the game is worth everyone's time. Until the resource grind comes into play.