Folks take showers for granted since they were so common during the Wild West period. Smelling like animal manure is enough to put anybody off the idea of competing in Gunslinging bouts. Although it’s a predecessor to the first, Red Dead Redemption 2 portrays the waning years of the Wild West in all its gritty realism and makes it appear more enticing than ever.

Unlike other video games, Red Dead Redemption 2 is much more than simply another adventure in the Old West. It’s among the most comprehensive games available right now, however that level of realism presents its own array of drawbacks. I’m kidding, there’s none, Red Dead Redemption is truly a Work of Art. I would like to officially label it as “The Transfiguration” of Video Games,

It’s the year 1899, and Arthur Morgan, a No- Bullshit gunslinger as well as a veteran of the Van der Linde Gang, is leading a band of outlaws who are losing their wild west existence in the wake of industrialization and statutory legislation in the United States. Rather than gang members, the Van der Linder crew acts more like an extended clan, perpetually on the flight from government investigators and clinging to the waning vestiges of the American Frontier. Thus, their campground and staging ground is continuously moving, taking them to new landscapes and cities on a continuous occasion, where Dutch always promises that the gang’s final big catch is just lingering a few miles from here. Red Dead Redemption 2’s open-world is a sprawling stretch of gravel tracks, rolling green hills, twisting streams, and massive woodlands sprinkled throughout with cities, villages, and farming. In this adventure, you’ll be able to gaze out over the magnificent panoramas of late 19th-century pastoral America and get caught up in the overpowering feeling of scenic scenery that permeates the map continually. But what truly makes this more than just attractive background and cinematic trailer fodder for the advertising department are the incredibly finely honed details that provide dimension and character to the landscape.

Have You Read: Strangers of Paradise: Final Fantasy Origin Review

The developer has embraced the Grand Theft Auto V style of cramming this world with as many minutiae as possible, yet in this scenario, it adds so far more to the natural feeling of the gameplay than it achieved in GTA. To be honest, I played Red Dead Redemption 2 for much too long, wasting days on end doing mundane things like dealing blackjack or going out for a horseback ride or going fishing and hunting to see what surprises awaited. While helping a samaritan save their family from robbers or just throwing explosives into the crowds of the federal agents, there was always plenty exciting going on all around you, with fresh experiences and characters to offer your “HOWDY” to.

A characteristic of the effective narrative is the sense that every task has a little piece of a bigger tale to tell. This is especially true with the personalities, who all seem to have their personal interesting experiences, as well as their respective aspirations and desires. For example, there are individuals like Hosea Matthews, Leopold Straus, Sadie Adler, Susan Grimshaw, Josie Trelawny, and Lenny Summer who are so vivid and nuanced that I could allude to them by their full names rather than just as “Gunslinger woman” and “High hat man.”

Especially John Marston, the protagonist of the previous title, is granted greater depth in this sequel, as we learn more about his past and family situation, particularly his bond with his child, Jack.. They become even more heartbreaking when they begin being shot and falling like ants at an NRA gathering since they have become so attached to these personalities and the creators appear to have grasped and applied this concept brilliantly. All of this, together with the extremely appropriate music and intelligent utilization of color schemes and different landscapes, creates a rich, realistic seeming ambiance that just a handful of titles (if any) have ever managed to achieve to such a high level. Every tool at your disposal is put to use in creating the right atmosphere to go along with the action, and it’s simple to get fully engaged in the experience. Since I didn’t want to skip anything this videogame was hiding under its sleeves, I never used the quick travel feature in Red Dead Redemption 2 not once — and if you know how restless I am, that’s a major feat for me.

However, it doesn’t mean that the gameplay didn’t put me under the strain. The biggest and most evident is the Rockstar signature of clumsy handling, in which everything moves like a goat’s butt, even the goat itself. Even if I believe that perfecting the animals’ and buggies’ handling is an essential element of the training process, it doesn’t explain the clunky on-foot movements or the cover mechanism, which were fixed in Uncharted following two installments, but the Rockstar technology doesn’t appear to be improving. Additionally, the gameplay lacks a feeling of regulating revenue, and as such, players are likely to make more cash than their bank account can handle after they’ve completed a significant number of narrative tasks. With all of my weaponry upgraded, my encampment completely upgraded, and all of the food I needed to resupply my mounts, I had sufficient cash to pay out the bank’s reward for stealing it 20 times over. Even though it’s a fairly typical issue in video games, this one detracts from what would otherwise be an excellent tale involving Dutch and the rest of the gang needing just a little more cash for retirement from the world of guns and murder forever.

*SPOILERS* This isn't even a cutscene. Such a strong speech happened randomly. #RDR2 is a f*cking masterpiece! pic.twitter.com/Jja0yfDscf

This is a wonderful, lengthy account of some men who had to figure out how to live and make their presence known in a society that was ignoring them. As the title suggests, it might very well be a story of redemption. In addition to all of that, there are so much fun packed into these spectacular (but realistic) settings that it is impossible to grow weary of them. Red Dead Redemption 2 has transcended beyond being just a video game by stretching the boundaries of platforms to their absolute maximum. This isn’t only the best title of 2018. Critics and gamers alike would remember and the games that’ll follow will pay homage to Red Dead Redemption II for generations to come. 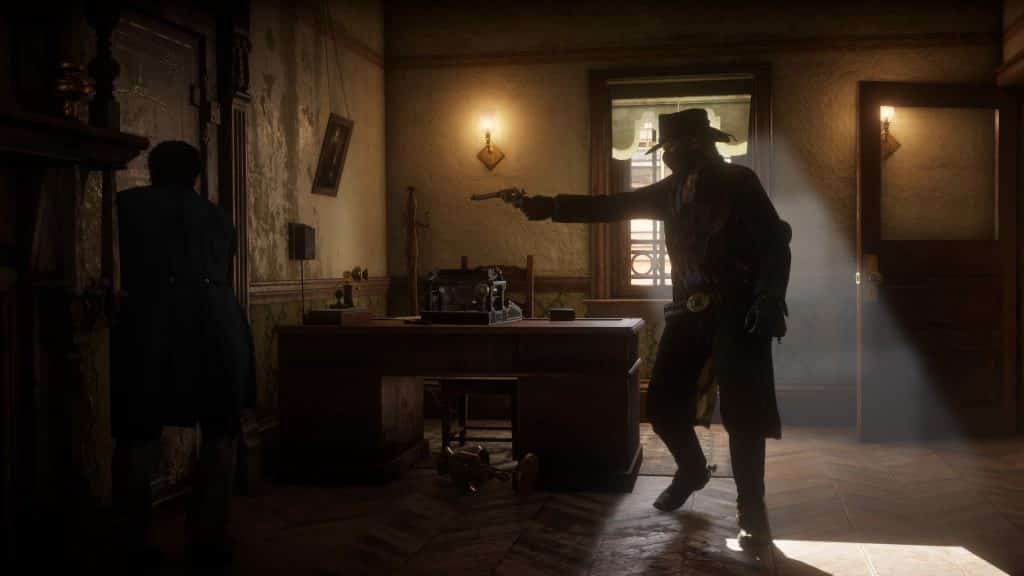 This anecdote, even if you’re neither a gamer nor a Wild West movie enthusiast, is worth your time…

So, The Red Dead Redemption Earns a Score Of

After a lot of thinking, we’ve come up with a revised ranking scheme for the titles we revisit:   I never slept during a workweek to invest my hours with it, realizing well that we have to get up at 8 AM the following day to get back into the rat race? So on that measure, The Read Dead Redemption 2 gets a score of 10.

Rockstar Games Confirm That the GTA 6 Leak Is Real