The Last of Us Part 1 Leads UK Boxed Charts While September is slowly going full gear with the game releases. While games like Saints Row might not have gotten a good reception among the general audience, the GFK UK Boxed Charts shared the numbers for it.

For starters, Sony’s The Last of Us Part 1 currently tops the whole chart. Announced in June, the game is a remake of the 2013 PlayStation 3 chart-topper. The new release comes with updated content and mechanics, alongside additional content and accessibility options.

Also Read: Xbox Share Plans for the Future of Call of Duty on PlayStation

As per Gamesindustry, the title sold half the number of copies as Deep Silver’s Saints Row, when it debuted at No. 1 last week. It is to note that Volition developed reboot launched on a Tuesday. On the other hand, The Last of Us took the Friday release. Speaking of Saints Row, it saw an 80% drop in sales compared to last week, positioning at the sixth slot.

PlayStation’s Horizon: Forbidden West still held onto the second position, despite a 46% sales drop since last week. Check out the GFK UK Boxed Charts for the week ending September 3: 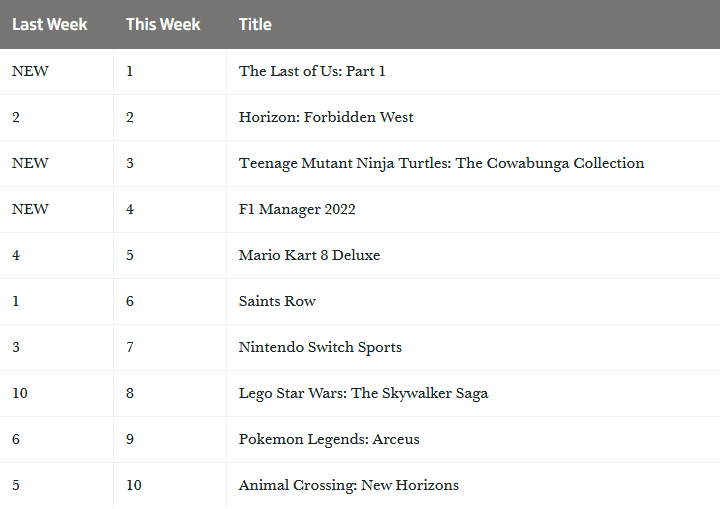