Wolf Among Us 2 Tells The Wolf’s Story Telltale Games has officially released a trailer for the long-awaited sequel to The Wolf Among Us following months of tireless anticipation. With this teaser, the much-loved studio can finally show off the game to its full potential, and fans are eagerly awaiting any new information on the sequel.

To prepare for The Wolf Among Us 2, many gamers will need to brush up on the first game’s tale, which was released nearly a decade ago. Many essential plot aspects, both new and old, are on exhibit in the action-packed video, which gives fans more than merely a title board and an establishing shot.

A Recap of The Wolf Among Us

The Wolf Among Us is a classic Telltale Game-based somewhere in 1980s New York.

Fable Town, a fictional town filled with fairytale beings tucked away somewhere in the heart of New York City, is the setting for this story. The player assumes the role of the sheriff of Fable Town, Bigby Wolf in this hidden society. Bigby Wolf, the Big Scary Wolf of fairy tale mythology, is a rehabilitated but still tormented creature who requires a great deal of self-control in order to stay a human.

Have You Read: Hideo Kojima’s “Radioverse” is Gold Mine of Information

Despite his best efforts, Bigby constantly finds himself in dangerous and violent circumstances, which forces him to transform into his vicious and intimidating wolf persona, much to his own delight. It’s only natural that Bigby has earned a mysterious reputation among the other fairytale characters given the nature of his work and his menacing appearance. In the predecessor, Fable Town’s mayor Ichabod Crane is implicated in a string of murders, which the Big Bad Wolf investigates with the help of Snow White revealing the town’s political corruption. Wolf Among Us 2 Trailer Details

Now that The Wolf Among Us 2’s teaser has been out, viewers will discover right away that our favorite Big Bad Wolf is no longer serving as the sheriff of the mysterious and at the same time sinister Fable Town, but rather as a private detective. During the trailer, Bigby recalls a mission gone haywire in a support group ring, when he tracked down a person of interest in a dirty hotel room.

Two suspects are instantly alerted to Bigby’s arrival inside the apartment as he breaks into the room and flashes handcuffs at them. There are two people that seem like figures from The Wizard of Oz: the Scarecrow is smoking from a bong while seated on the sofa, as well as the Tin Man is a massive metal monster. It is safe to assume that the very same deliciously dark interpretations of famous children’s characters are on exhibit once again in this sequel. 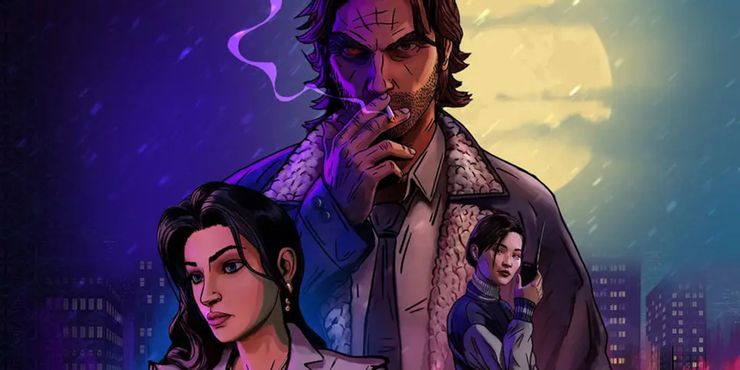 To add credence to speculation, this suggests that the tales in The Wolf Among Us 2 will be entirely new.

Bigby torches the Scarecrow using a kitchen burner and then gets thrown through the window by the Tin Man. Bigby emerges like a wolf from the shadows cast by the freshly opened hole in the motel wall, his bright eyes searing the gloom around him. The support club president asks, “How does the anger present itself?” while this visual displays on the screen. While all of this is going on, a mystery lady sits in the hotel room, deadpan to the chaos around her but smiling strangely when she sees Bigby in his terrifying real form. The Wolf Among Us 2 is scheduled to come out next year on the PS5, PS4, Xbox X/S, Xbox One, as well as on Epic Games.