Surely there must be a section on dragons in an encyclopedia about video game creatures. In 1979 a title known as Atari Adventure introduced the concept of the fire-breathing monsters, and the pair have since grown inseparable. Whether it’s because of the fact that creatures are so cool or owing to the ethos of the creators, it’s hard to say.

With that being said, here’s our list of Best Dragons Ever Featured In Video Games.

The storyline of The Elder Scrolls 5: Skyrim is heavily influenced by reoccurring creatures. Even though Skyrim’s climax is unlimited because of missions respawn and gamer’s ability to scale their stats indefinitely, the highly-prized Bethesda title holds a primary plot with a dragon at its finale. Legendary red-eyed dragon Alduin. The majority of citizens of Skyrim saw Alduin’s desire to be adored as silly. He probably would’ve survived if he had stayed the World Eater and wouldn’t have become so egocentric. A dragon’s prominence in an RPG title of this level justifies Alduin’s topmost slot.

Bahamut is a constant in Square Enix’s Final Fantasy franchise. This character’s loyalties have shifted on multiple instances all through the franchise’s runtime. Occasionally he helped you by improving your talents and armor, while on some occasions the giant served as one of the title’s most powerful villains. Bahamut is summoned in many Final Fantasy titles by fighting him. Bahamut’s appearance changed throughout time too though. In spite of the fact that he has always maintained the exact bodily shape, Bahamut’s temperament and color changes allowed him to seem innovative in every encounter. To face the flying beast in the franchise still serves as an exciting prospect, as he has never broken our heart in terms of difficulty as well as the rewards that come with defeating him are many.

The Witcher is a franchise that doesn’t require any preamble. Only CD Projekt Red’s unique products are as popular as the classic novels and Miniseries. Even though the studio’s debut in the franchise had certain flaws, it likewise explored something new and fresh, bringing the essential spirit of the novels into gaming with simplicity. The Witcher 2, on the other hand, was a huge hit. It’s possible that you didn’t get a suitable introduction to Saskia based on your decisions. The flying beast in this franchise is not just shapeshifters, however, they are also a relic of the past. One of the last survivors, Saskia assumes the appearance of a dragon to protect her family. It’s not a cruel creature by character, but its goal is honorable.

Deathwing the Destroyer is sometimes referred to as Neltharion the Earth Warder as he was before he became a demon. The Dragon Aspects who obtained strength from the Titans included Neltharion as well. Since he was granted the authority to guard the ground and all of Azeroth’s depths, Neltharion has grown in stature and influence. 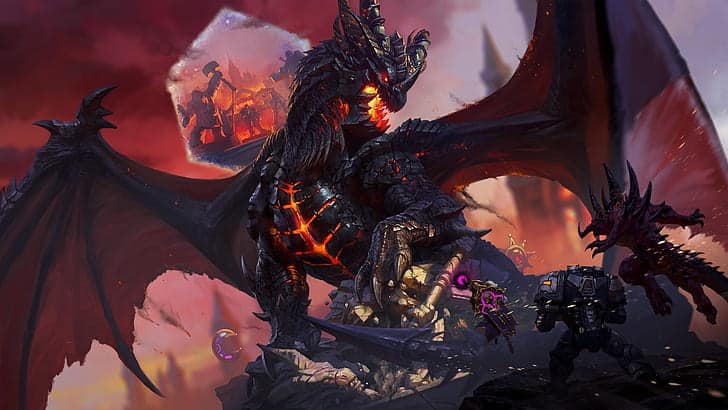 However, doing this specific assignment was his worst fear. Aside from his newfound moniker as Aspect of Death, Neltharion gained the moniker of Deathwing the Destroyer because he was a direct conduit for Old God’s power due to his proximity to them.

It is thought that the name “dragon,” used in Old Greek to describe gigantic serpentine creatures, was derived from the term “dragon” that we speak of today. Drakons like the Lernean Hydra (the inspiration for the Hydra King in Sony’s original God of War) are examples of this kind. As a result, we may conclude that the Hydra is a sort of dragon as well. The Hydra is the opening monster in God of War, preventing Kratos’ vessel from reaching Athens. Nevertheless, the Hydra shown in the franchise shies away from the original description of this mythological creature. As opposed to a single everlasting head, the Hydra King is the most powerful Hydra head. It’s not just that it’s bigger and scarier compared to others; it can also cure and revive them. Kratos killed the Hydra King’s head in a horrific manner, which was the ultimate option to properly vanquish this monster.