Elden Ring: How To Defeat Red Wolf of Radagon The action-packed adventure game is being loved all around the world. Yes, we are talking about Elden Ring, one of the most popular and creative games these days. The game has is appreciable on almost every front but, the most plausible aspect is its openness, the feeling of freedom provides to the players. The game does not guide you, find your own in and outs. Your perspective toward the open world lets you enjoy the game as you like. Finding your routes, and new shortcuts is time taking but it feels real.

As the game doesn’t guide you much, which sometimes is a problem. Not getting any hints on where to look for some gem or the magical sword, or how to defeat bosses like Godfrey and Maliketh, is a pain. But that’s why we are here and today we are going to present some invaluable tips and techniques on how to defeat the Red Wolf of Radagon. The Red Wolf of Radagon is the first major boss of Raya Lucaria, who might give you a tougher fight than Rennala, the Queen of the Full Moon. The Wolf’s moves are seemed to be a bit unpredictable and if the player’s arsenal is not favorable, you might be in trouble. This is a must-read for those who are stuck at the Red Wolf of Radagon. 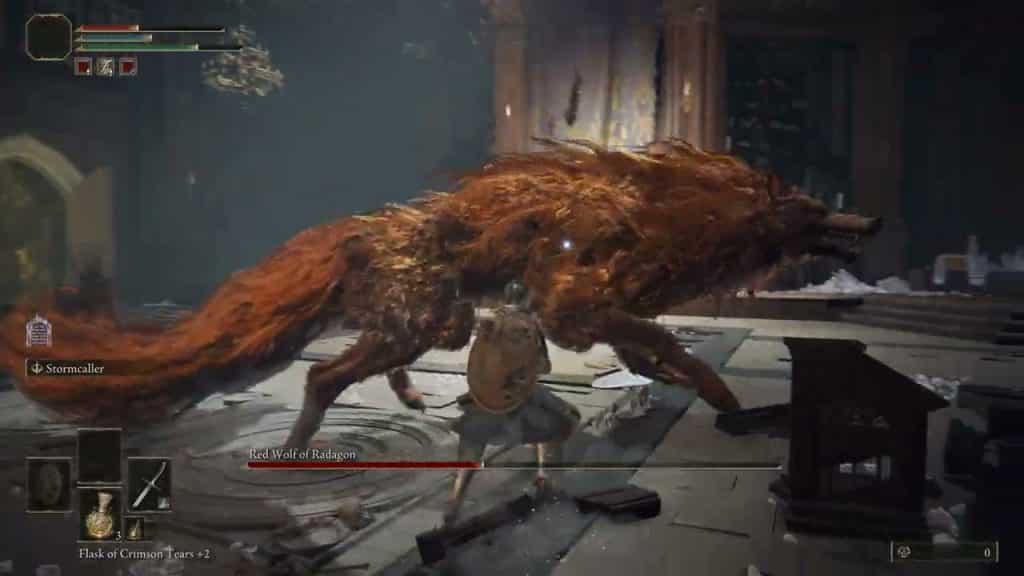 The main trick to defeating this boss is to wait for the moves that take more time to readjust and then you can punish it, and yes the wolf has a lot of moves, knowing about their weakness and how to dodge them is the key.

Have You Read: Elden Ring: How To defeat Godfrey, First Elden Lord

The first move is to take into account is its sword attack, as after this the wolf takes some time and you can give him some hits. It attacks with his sword by either jumping if you are far from the Wolf, consider this a gift or an invitation to counter-attack, as the move can be dodged just by rolling towards it. Quickly land some hits after dodging. The other sword attack gets triggered when you are close to it and it comes with either single or double swings, another easily predictable move.

The second attack to be aware of is its magical attack. The Wolf releases magical lights with its mouth which floats in the air for a couple of seconds and attacks almost simultaneously. Keep an eye on the boss and guide those spells or magical lights in a different direction and try to get close to the boss. Now, if the Wolf pulls out a dagger from his mouth get far away. If the Wolf runs towards you, keep your distance from it. This will force it to use that jumping sword technique and that’s your opportunity.

Finally, the bite move, avoid every bite move as they are quick and will punish you harshly, except the one where the Wolf lifts off the ground before lunging. Where other bite moves are dangerous and it is better to avoid those, this can be considered an opportunity as it has the longest animation. By observing the Wolf and by trying multiple times you will be able to distinguish between the specific bite move and the others. Keep trying and apply these tricks and in minutes, you will defeat the Red Wolf of Radagon.