You hardly notice that you’ve taken command of the title when the switch from cinematic to gameplay is as seamless as a knife cuts through butter. And I can’t quit staring at everything in the room. The flow of Senua’s fur and the intricacies surrounding her face and tresses. The way she’ll tilt her neck and widen her gaze if you just stand there for a moment. Her trepidation is palpable. This isn’t where we were meant to be. What are you doing?
Where are we?

The eerie silence is punctuated by an almost continual soundtrack of whispers. A melodramatic impression is achieved by having them murmur (and sometimes not so softly) and nearly converse with one other. They push you ahead, yet they also dispute and become tangled up in their own thoughts. “The Narrator” has been my nickname for the speech that sticks out the most.

Have You Read: Hellblade: Senua’s Sacrifice: A Firsthand Account of Psychosis (Part 1)

As for Senua, I don’t consider her to be ‘real’ Senua, however, she is the one that breaks the fourth wall while maintaining the engagement. Rather, she appears to be the most powerful alter. Periodically, Senua’s own speech breaks them, a mixture of dread and order. Even when the volume is increased, all of the sounds remain faint. Audio that is both soothing and scary at the same time, hypnotizes players to sleep. Yes, this is the way.
No! Turn back, before it’s too late.
Why did she do that?
There’s no going back now.
What has she done?

There are definitely some flaws in the generally flawless exterior that are starting to appear. For the face animations, the motion analysis was a little loose. However, it isn’t the exaggerated graphics that has turned once-awesome games into a complete farce. However, there were parts in Until Dawn that I couldn’t take sincerely because they were so absurd.

That’s when the magic they’d managed to construct around me was broken. I think we’re still a long way from mastering face features. My graphics card is also having trouble at this time, and I’m seeing some ripping, but when I nudge Senua closer to a small beam over a stream, my nagging friends are once again there.

Don’t look down!
We’re going to die.
She can’t do this.
Just keep going. 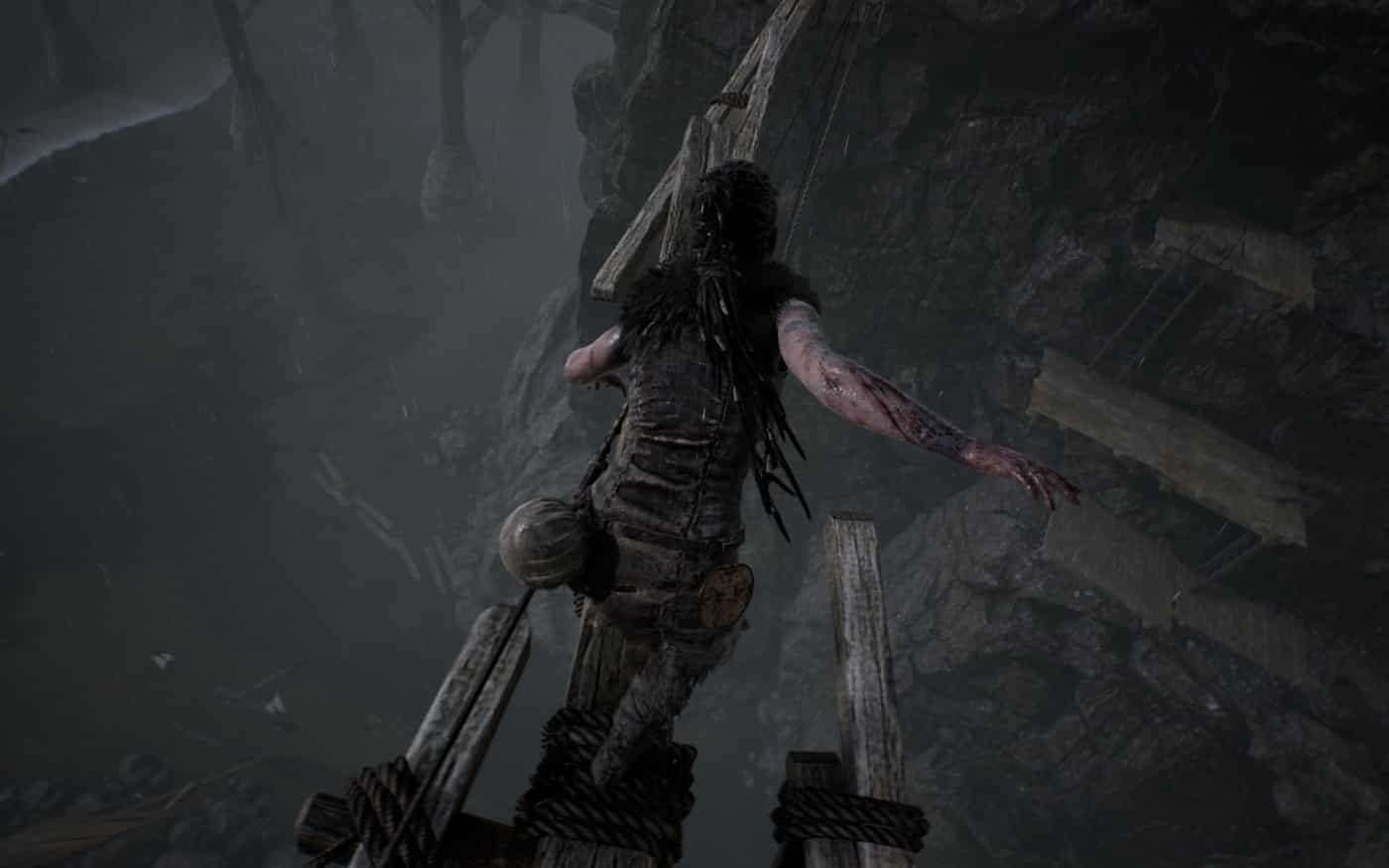 The Narrator’s stories about The Voices and the abrupt appearance of new ones draw me back in.

A gate? What lies beyond it?
Don’t open the gate.
We have to go through.

A lot of people’s lifestyles are filled with self-examination and concern about the impact their choices have on others around them, and I believe this is true for the majority of us. The effect we have on the world around us. The dread of the unfamiliar has served as a counterbalance to our species’ interest, which has led to the accomplishments we have made.

Druth makes an appearance as well. But he appears more like an illusion formed from the recollections of an old master. I’m not sure what his identity is yet. Psychosis has still another aspect. As we move deeper into the tales of Norse mythology, where the force of the deities may destroy a feeble soul, it could be ascribed. At this phase, Senua’s illusions are more apt to be auditory and graphic. It would be intriguing to see how Senua’s psyche is affected by the road leading to the Illusory keeper of the Gateway of Hel. This is it.
Why can’t she open it?
We shouldn’t go through.

I’ve noticed that I don’t find the urge to race at this stage. I’ve always been a person who prefers to get things done quickly rather than savor the experience. With Hellblade, on the other hand, I like to bide my time.

We also get our first taste of fighting in this chapter. The only thing I can say about this is that it’s a little disjointed. While the graphics aren’t exactly fluid, there’s not much to benefit from anything except left-clicking the Crap out of your rivals. The moment in which they were fighting the shadow creatures as if to keep the gloom at bay, was one of my favorites. Senua’s horrific demise seems oddly pleasant at this point. This time around, the visuals, motion capture, and overall thoroughness to realism and details have all wowed me again.

I can’t stop watching since the soundtrack and voice acting are so beautifully done that I’m unable to put it down. First, we learn about Senua’s misfortune and how the corruption is trying to eat away at her mental faculties. An innovative technique, this makes the game Roguelike without placing a hard restriction on the protagonist. It would also be interesting to observe how this emerges when I, surely, fall short of my goals at least once. I have no idea what’s going to happen in the next part, but I’m looking forward to finding out.