Everything We Know About Horizon Forbidden West Guerrilla Games’ forthcoming successor to Horizon Zero Dawn, Horizon Forbidden West, has now gone gold and will be released next month. Although it’s a busy time of year for game debuts, this particular sequel is at the summit of many fans’ wish lists.

So, without further ado, here’s everything about the Horizon Forbidden West.

Horizon Forbidden West, which was originally scheduled for launch in 2021, will be released for PlayStation 4, and PlayStation 5 on February 18. You don’t have to dive deep into the narrative left by its predecessor before you can start playing the sequel. The developer claims that Horizon Forbidden West may be enjoyed without having played Zero Dawn, however, as a long-time gamer, this is something I do not advocate for. If you haven’t already, I strongly recommend that you play the first game before this one. Beware of minor spoilers for Aloy’s initial adventure if you’re attempting to steer away from the subject of the original game.

Have You Read: New World: The Lore of Isabella

Aloy was formerly an outcast among her people, but she was able to unite the many tribes of the region in Zero Dawn to fight against a shared enemy. Machines that were formerly friendly were turned hostile by the old AI software that the human adversary had unleashed on them. However, the game’s conclusion left us with many unanswered questions concerning the universe and the genesis of its animal-like machines.

Following into the next game, Aloy encounters a variety of new challenges, both physically and mentally, as she sets off on a westward journey. A famine-inducing crimson blight and devastating weather patterns have Aloy traveling deep into the Forbidden West to find out what is triggering it. Fortunately, she won’t have to do it all alone. Settlements will be given a greater emphasis in the sequel, in order to give gamers more motivation to explore them. Forbidden West’s board game, dubbed Machine Strike, may be played in the local bar or at the local tavern. You’ll also face waves of enemy robots in the Arena, putting your skills to the test.

The iconic Golden Gate Bridge is one of the most recognizable landmarks in the sequel thus far. More than a few decaying cable cars were also shown off last year when we saw the city’s landmarks in action during the gameplay reveal video. Horizon Forbidden West’s new free-climbing feature will allow you to scale any of them. We also saw Aloy descend into an aquatic world at some point, something we expect to see more of during the game. 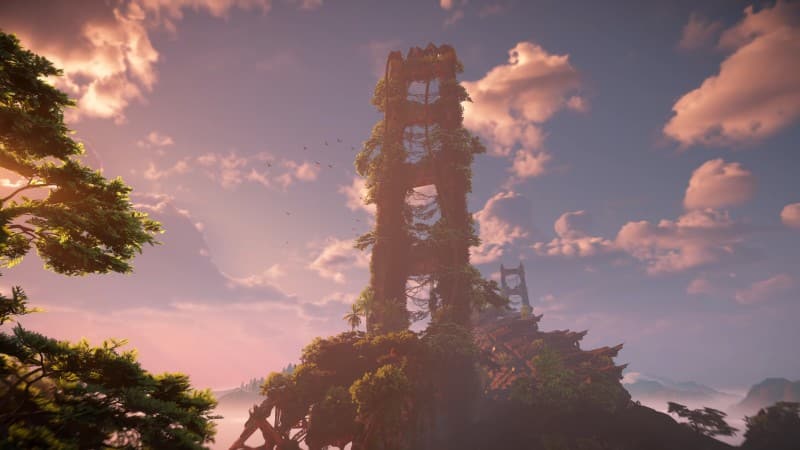 Forbidden West’s topography, which closely mirrors western U.S. west of Utah, has almost every kind of climate conceivable. The game has everything from snow-capped mountains to rocky deserts, as well as pristine beaches and dense forests.